Length: 7 miles / Elevation gain: 1,800' / Highest Elevation Point: 10,000'
The original plan was to head up to the Mt. Whitney Trail (the trail that leads to Mt. Whitney, the tallest mountain, at 14,506', in the lower 48) to Lone Pine Lake, roughly 3.5 miles in and up. The final destination on that trail without requiring a permit to tread further into the John Muir Wilderness, and to hit Mt. Whitney itself.
A sudden snowstorm overtook the area - not uncommon this time of the year, or in this part of the Eastern Sierra Nevada Mountains - which means we would be hiking into the unknown. And literally into the clouds. Winds, snow and very cold temperatures.
Here's how it played out. Sun and brisk in the Owens valley and the foothills (and the Alabama hills) at the base of the Sierras. At 'basecamp' (Whitney Portal campground and the location of the trailhead) - cloudy with snow clouds lingering not far above. About 30º - very cold, but not a deal-breaker. Heading up the trail, the snow started to fall - just flurries, really - and as we ascended into the snow clouds (literally) the intensity picked up a bit, as did the snowpack. Wasn't impassable though... the the temperature was dropping precipitiously, from 8,600' or so to where we finally had to stop - probably less than a half mile from the lake at around 10,000' - due to intense cold.
At this point the snow was persistent and the temperatures in the single digits, and basically unbearable with the winds. So the decision to turn back was basically a no brainer.
But this is the Sierra Nevada at any point in any season, though especially in the fall/winter. Storms can arrive and depart at any point. Sunshine can peak through the storm clouds and the weather can change in mere fractions of a mile.
Got some great photos out of it though!
We will be back. 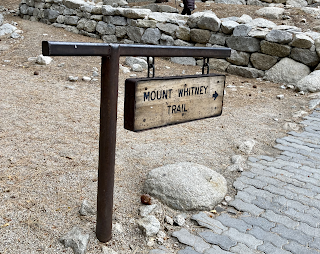 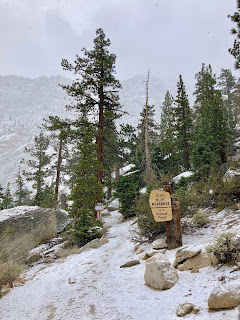 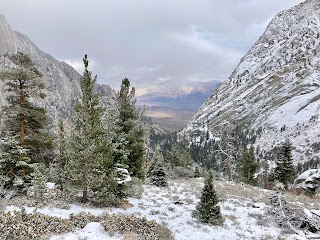 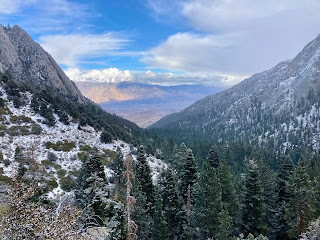 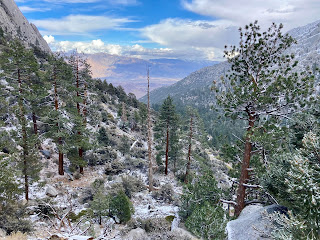 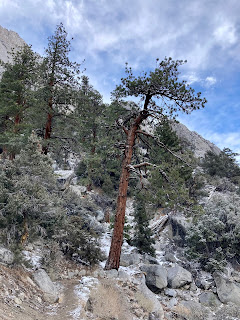 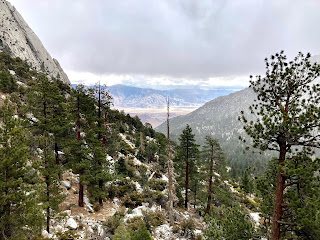 Posted by virtualscottx@gmail.com at 7:03 AM